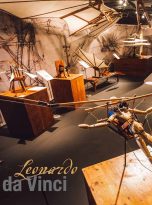 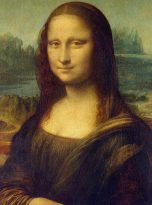 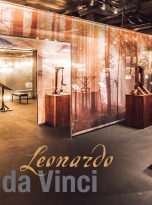 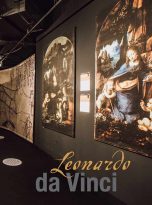 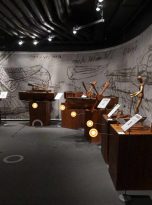 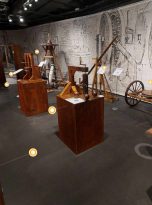 You can visit this exhibition on your smartphone, tablet, desktop or smart-TV.

Leonardo da Vinci (14/15 April 1452 – 2 May 1519) was an Italian polymath of the High Renaissance who is widely considered one of the most diversely talented individuals ever to have lived. While his fame initially rested on his achievements as a painter, he also became known for his notebooks, in which he made drawings and notes on science and invention; these involve a variety of subjects including anatomy, astronomy, botany, cartography, painting, and palaeontology. Leonardo’s genius epitomized the Renaissance humanist idea, and his collective works compose a contribution to later generations of artists rivalled only by that of his contemporary Michelangelo.

Leonardo is widely considered one of the greatest painters of all time. Mona Lisa is the most famous of his works and the most famous portrait ever made. The Last Supper is the most reproduced religious painting of all time and his Vitruvian Man drawing is also regarded as a cultural icon. In 2017, Salvator Mundi was sold at auction for $450.3 million, setting a new record for most expensive painting ever sold at public auction.

Leonardo is revered for his technological ingenuity. He conceptualized flying machines, a type of armoured fighting vehicle, concentrated solar power, an adding machine, and the double hull. Relatively few of his designs were constructed or even feasible during his lifetime, as the modern scientific approaches to metallurgy and engineering were only in their infancy during the Renaissance.

Some of his smaller inventions, however, entered the world of manufacturing unheralded, such as an automated bobbin winder and a machine for testing the tensile strength of wire. He is also sometimes credited with the inventions of the parachute, helicopter, and tank. He made substantial discoveries in anatomy, civil engineering, geology, optics, tribology, and hydrodynamics, but he did not publish his findings and they had little to no direct influence on subsequent science.

We use cookies on our website to give you the most relevant experience by remembering your preferences and repeat visits. By clicking “Accept”, you consent to the use of all the cookies.
Do not sell my personal information.
Cookie settingsACCEPT
Manage consent

This website uses cookies to improve your experience while you navigate through the website. Out of these, the cookies that are categorized as necessary are stored on your browser as they are essential for the working of basic functionalities of the website. We also use third-party cookies that help us analyze and understand how you use this website. These cookies will be stored in your browser only with your consent. You also have the option to opt-out of these cookies. But opting out of some of these cookies may affect your browsing experience.
Necessary Always Enabled
Necessary cookies are absolutely essential for the website to function properly. These cookies ensure basic functionalities and security features of the website, anonymously.
Functional
Functional cookies help to perform certain functionalities like sharing the content of the website on social media platforms, collect feedbacks, and other third-party features.
Performance
Performance cookies are used to understand and analyze the key performance indexes of the website which helps in delivering a better user experience for the visitors.
Analytics
Analytical cookies are used to understand how visitors interact with the website. These cookies help provide information on metrics the number of visitors, bounce rate, traffic source, etc.
Advertisement
Advertisement cookies are used to provide visitors with relevant ads and marketing campaigns. These cookies track visitors across websites and collect information to provide customized ads.
Others
Other uncategorized cookies are those that are being analyzed and have not been classified into a category as yet.
SAVE & ACCEPT
X